Dulverton Waste Management was established as a Joint Authority under the Local Government Act 1993 by the Central Coast, Devonport City, Kentish and Latrobe Councils.  Our organisational setup, led by a skills-based Board of Directors, is committed to delivering outstanding governance, compliance and reporting performance across environmental, social and financial measures.

The Cradle Coast Waste Management Group is a collaboration between seven local councils of North West Tasmania to reduce landfill waste and improve recycling performance.  The Group sets an annual plan and budget derived from a regional voluntary waste levy and guides implementation of the plan by DWM’s Cradle Coast Waste Services. 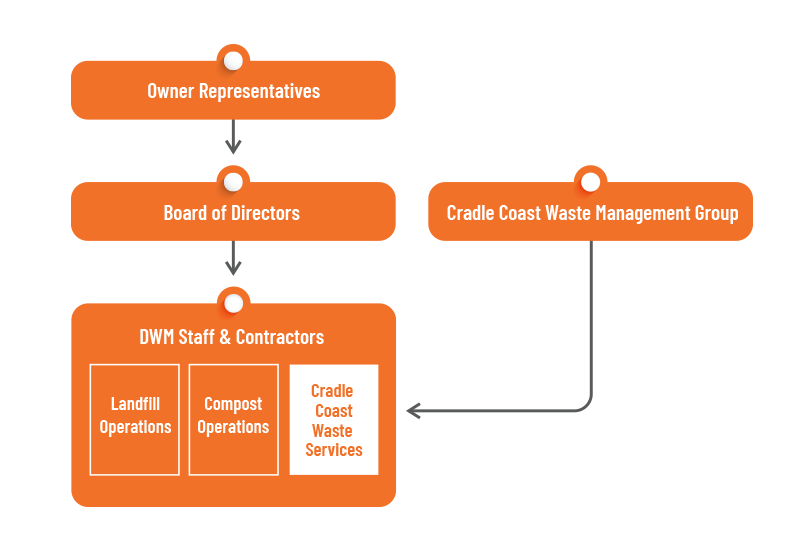 The membership of the Authority consists of two Representatives from each participating council to act on their behalf. The Representatives’ powers and duties are to periodically review the performance of the Board and individual directors, set terms of office and remuneration and approve corporate plans.

Grant has had a long history of involvement with the Dulverton Regional Waste Management Authority being a member of the initial working group representing the four member councils that established the Authority. He has also served as an Owners Representative on the Authority and assisted in drafting the current Authority rules.

Grant also served in the positions of Owners Representative with the Cradle Coast Authority and Cradle Coast Water Authority. He was a Director of Cradle Mountain Water for six years, and is currently a member of the State Grants Commission. Grant is also a Justice of the Peace.

Cameron has had a career in organizational management spanning 35 years. A former Army Officer in the Infantry Corps, reaching the rank of Major, Cameron has deployed on operational service. Upon leaving the army, Cameron began a successful civilian career in supply chains & logistics, and project management. This included positions as a General Manger with Boral Construction Materials Group, Business Unit Manger for Toll Energy-based in Dampier WA- which oversaw all industrial support services for the $5b Gorgon Project on Barrow Island, and the General Manager Freight Services for Tasrail. Moving overseas, he then provided the in-country project management for the introduction and commissioning of 1000 special build railway wagons for Saudi Arabian Rail. Returning to Australia, this was followed by a role with the Inland Rail project, where- as the project director, he oversaw the design of the new track sections between Albury to Parkes.

Cameron has worked extensively across Australia and internationally, including Saudi Arabia, the UAE, USA, Poland, Italy, and Bangladesh. As a senior executive, he has extensive operational experience in managing industrial service businesses.

He holds master’s Degrees in both Business Administration and Law, a Graduate Diploma in Logistics, is a Fellow of the Governance Institute of Australia, and a Member of the Australian Institute of Project Management.

A keen woodworker, Cameron took a year off and studied at the Wooden Boat School in Franklin, gaining a trade qualification in wooden boat building. He has also played rugby for the NSW Waratahs, coached rowing at all levels, and walked unassisted across the Great Sandy Desert in 2005.

Jeff worked in the local government sector in Tasmania and New South Wales for over 28 years.

His interest in life-long learning has led him to embark on a new career in corporate governance and the tertiary education sector.

Currently employed as Production Manager at Hellyer Gold Mines; Jon has a 15 year career in engineering, procurement, project management, asset & maintenance management, and operations management. He has gained experience in the defence and nuclear industry in the UK and then from 2004 has worked in cement, metals processing, mining, rail, and construction industries with companies such as Cement Australia, Rio Tinto, TasRail, Nyrstar and VEC Civil Engineering.

Jon is qualified with a Bachelor of Engineering with Honours, Master of Business Administration, a Diploma in Project Management and is a Graduate of the Australian Institute of Company Directors. He also has qualifications as a Lean Six Sigma Green Belt.

Jon has lived in Launceston since 2008 with his family and enjoys coaching junior soccer in his spare time.

After studying in London, Ken worked as a management consultant in the UK, Switzerland and Germany. Since returning to Australia from overseas he has held senior management positions and provided consultancy services to private sector companies operating in the mining, manufacturing, waste and public utility industries in Tasmania, NSW and Queensland. Ken has expertise in the fields of finance, accounting, tax, strategic planning, product costing, business improvement and industrial relations.

Have any questions about Dulverton Waste Management?

Ask one of our friendly staff members.